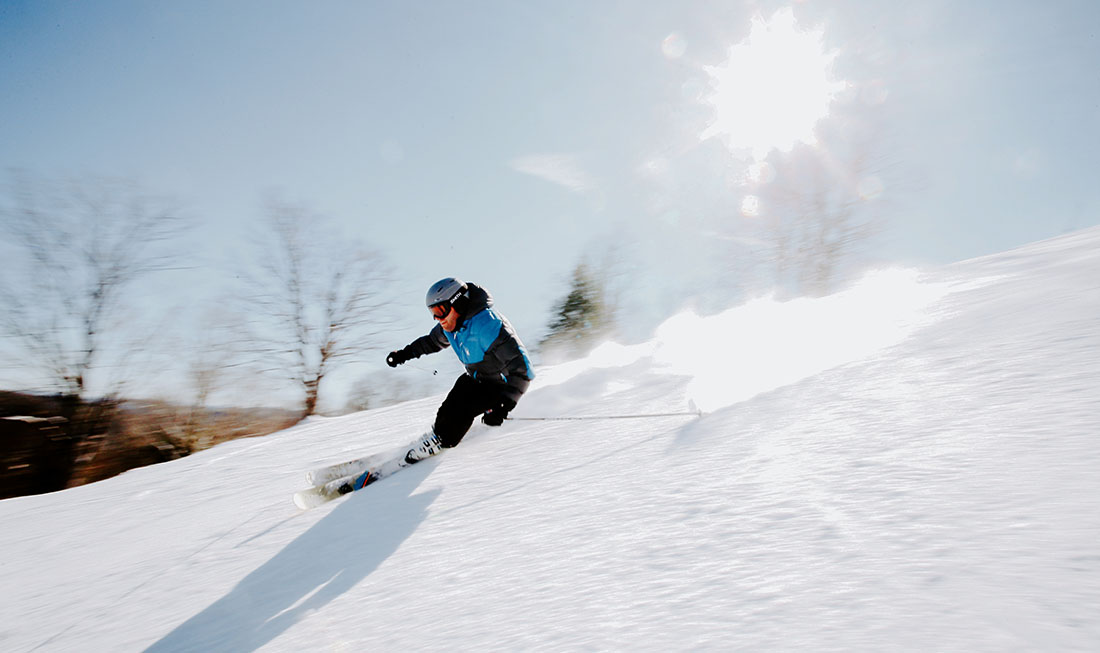 Long before downhill skiing was mainstream, before snowboarding was dreamt up, and before there was a true “ski industry,” American skiing was all about bringing small-town communities together and having a bit of fun in the winter cold.

Modern skiing has become a serious luxury sport, full of Gondolas, pristine resorts, and private trips that have taken the sport far from its humble beginnings. But if you search beyond the lines of skiers and high-speed quads at the mega-ski areas, you can still find places where American skiing culture is thriving.

Few hills bear the American-skiing tradition as well as Suicide Six in Woodstock, Vermont. It all started in January 1934 when an improvised rope tow was set up on Clinton Gilbert’s farm, just outside of Pomfret, VA, and in the heart of the Green Mountains. The “improvised” nature of the rope tow comes from the fact that the original contraption was powered by an old Ford Model T engine. This ski tow, set up on a local farmer’s hill, captured the imagination of Wallace “Bunny” Bertram, a former ski coach at Dartmouth College who help build that first lift in the field. Bertram took over the operation shortly after its opening, and set about improving the tow with an upgraded motor and sold lift tickets for a dollar apiece.

For the next several years, Bertram managed that single rope and carried local and out-of-town ski enthusiasts up the cow pasture. At the same time, Bertram, who is described as possessing an enterprising spirit, had bigger dreams for skiing in Woodstock and started pursuing them.

Bertram set about scouting the area around Woodstock for a more suitable recreation location. While surveying a topographic map of the region, he picked out a peak labeled, “Hill 6” and suggested that skiing down it “would be suicide,” and thus, Suicide Six was born.

Bertram bought property on the hill for three dollars per acre and moved the operation to its new location in 1936. Hill 6 offered a much larger area in which to recreate, and steeper, faster terrain for winter enthusiasts to enjoy. Suicide Six was well on its way, providing the Woodstock community and visitors from across New England an original taste of American skiing in the Green Mountains of Vermont.

Today, Suicide Six has experienced numerous expansions and improvements to its lodge and lifts, but it is still offering the original New England ski experience. It may not be the highest peak you can ride down, but Suicide Six is beloved by its community and steeped in the local culture in a way that is hard to find.

An average day on the hill will take you down every run (maybe even twice) and introduce you to local families, resort employees who have worked at S6 for over a decade, and show off the idyllic Vermont mountain scenery that brings it all together. It is less of an extreme fantasy playground, and more of a public easement that can truly make one feel at home.

Of course, you don’t get a strong local ski culture without some history to back it up. Following the origin story of the Model T and Bertram, Suicide Six was the site of several key moments in snow sports history.

Bertram saw the steep face of Hill 6 as the perfect area to pit skiers against each other, and in 1937 he created the FISK Ski Race; the first ski race in North America.

The race continues to this day and has become a rite of passage among east coast racers — former winners include Bode Miller, Chip Knight, Jimmy Cochran, and many other Olympians, U.S. Ski Team members, and NCAA Championship winners.

The other major event with roots at S6 is the US Open Snowboarding Championship. In 1982, a group of surfers and “snow surfers” put on the first race for their sport. The band of outsiders brought a cafeteria table up to the top of Hill 6 and flipped it over. They offered the table legs to racers as starting gates so that the founding fathers of snowboard racing had something to launch themselves down the mountain with.

The racers, dressed in a variety of gear including tennis shoes, jeans, and ski suits propelled themselves down the course and into snowboarding history.

It is hard to fathom how significant these two events were for skiing in America, but you can feel the pride the S6 community has of their hill’s contributions to snow-sport history.

Today, there may not be a car engine slinging wet ropes up a cow pasture, and all the cafeteria tables are probably indoors and upright, but you are still sure to find small-town New England charm and plenty of good times on the slopes of Suicide Six.

Suicide Six is only a few minutes’ drive from Woodstock, Vermont, and offers more than 100 acres of terrain with 30 percent beginner, 40 percent intermediate, and 30 percent advanced runs. There is a main base lodge, and three lifts providing access to the runs.

The town of Woodstock has plenty of hotel and vacation rental options to choose from, and skivermont.com is a great resource to help you find the right option.

A Day on the Mountain:

Once you’re up at the lodge, you can grab a pass, get set up with any needed rentals from the S6 ski shop, and start your day on the hill. Suicide Six offers ski lessons and approachable terrain for beginners, and steeper, flowing trails for more advanced riders.

Inside the lodge at the base of Suicide Six is Perley’s Pourhouse — a restaurant and lounge named for the first lodge-keeper at Suicide Six. There you can find a hot meal and beverage to warm you up before you make the trip back to town.

In Woodstock, you can continue to enjoy small-town New England, and soak up more of the beautiful Green Mountains.