Swiss-born ski legend, Hans Thorner, dreamt of building a ski resort that he could dub, “a little corner of Switzerland.” After spending nearly three decades operating ski schools across the US, Thorner landed in the quaint region of Londonderry, VT. He noted that Glebe Mountain’s separate valleys reminded him of Switzerland’s steep terrain. From there, Magic Mountain was born with the goal of creating a ski area “more Swiss than a Swiss watch.”

Magic Mountain opened for the 1960-61 ski season complete with a Swiss village at the base of the mountain. Thorner’s attention to detail and desire to bring a little bit of his home country to the US were what made Magic Mountain truly magical. Most notably, Thorner hand-selected a fleet of Swiss ski instructors every year that lived in the village, making Magic arguably one of the best ski schools in the country. Thorner was remembered for doing things a little bit differently at Magic. In addition to flying top-of-the-line instructors to the mountain each year, he used sheep to mow the slopes in the off-season. This was considered to be a tip of the hat to his home country.

To ski or apres-ski

If you’re not familiar with the term “apres-ski,” the French word literally translates to mean “after ski.” This is a time-honored tradition on most mountains nowadays, consisting of boozin’ and bonding with friends and foes alike. Sharing laughs and libations after a killer day on the mountain has become a quintessential part of modern ski culture. It has also grown into something much more. Partying in your ski boots now often includes live music, friendly competitions, special guests, and of course tasty beverages. So how did this French tradition make its way across the pond you may ask? While many mountains worked to adopt the custom, Hans Thorner was one of the first to truly bring the practice to the United States at Magic Mountain.

Thorner felt something was lacking in America when skiers left the slopes for the day, so he cultivated a rich apres-ski culture at Magic, famous for its nightlife. From the Abracadabra Lounge (Now Goniff’s Den) to the on-mountain Swiss feasts, there was always plenty to do off the mountain, and still is to this day. Magic Mountain quickly became famous for its rich apres-ski culture, steeped in Swiss tradition.

Nowadays, patrons who partake in apres-ski festivities at The Black Line Tavern give a friendly warning to newbies that they “better be prepared to make friends.” You will often meet new ski buddies willing to share their favorite spots on the mountain and best-kept secrets. You’ll find folk young, old, and everything in between enjoying the long celebrated apres-ski activities at Magic, something Thorner would have loved to witness. Parents can happily enjoy an adult beverage and live music while keeping an eye on their kids at the tubing hill, which is in full view from the lodge. The intimate and friendly culture is what brings a little extra “magic” to the mountain.

During the summer months, The Black Line Tavern stays open to offer apres-disc libations to disc golfers on Magic’s state of the art, championship course. The mountain’s challenging topography offers a classic New England style course, complete with a full 18 holes. So come snow or sun to enjoy Magic’s year-round activities and facilities.

Magic Mountain grew to be one of the largest and most popular ski resorts in Vermont in the 1980s. So much so, that they had to limit lift ticket sales on busy days to ensure that mountain never got too crowded. How cool is that? Unfortunately, in 1991, the mountain closed after changing hands and a few terrible snow-free winters. Magic remained closed until 1997, when it reopened after being purchased by Glebe Mountain Ski Associates, who spent a pretty penny to install several new chairlifts as well as a tubing hill. Even with these improvements though, the mountain struggled to keep up with bills and payroll. It changed hands a few more times from LLC to LLC. Fortunately for Magic, the owners and investors were determined to do right by the mountain and worked hard to continue to improve the infrastructure. Magic Mountain is a resort both owned and loved by people who actually ski the terrain, giving it that extra welcoming and homey feel. Today, Magic Mountain is owned by Ski Magic, LLC, who is dedicated to making improvements to the mountain with lift repairs, additions, and most prominently, snow-making. 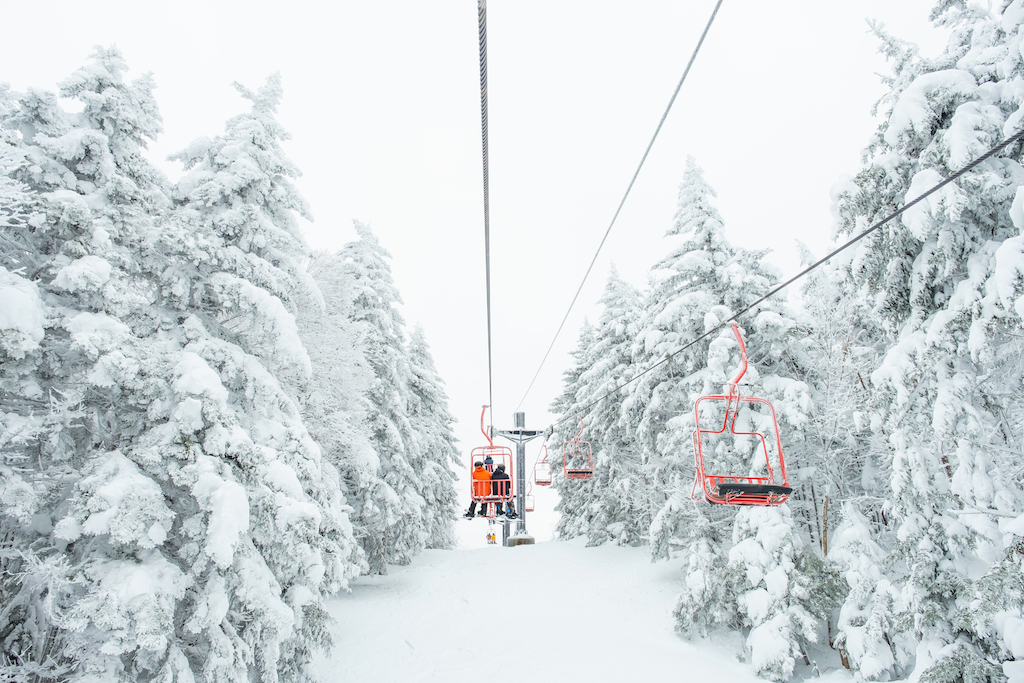 The magic of Magic

Magic Mountain is revered as being a less traveled, throwback experience. As you enter the resort, there is a sign along the access road that reads, “You’ve officially taken the road less traveled.” With that in mind, Magic has worked hard to keep the resort focused on one thing and one thing alone, the ski experience. They have little interest in expanding into a large, overcrowded tourist destination. Magic prides itself on lift lines that never exceed 10-15 minutes even on its busiest days because when it really comes down to it, people just want to ski. The terrain is undoubtedly one of the most challenging in the East. There are long, steep, and narrow runs that wrap around the mountain and weave in and out of trees that will bring a thrill to any seasoned skier. There are also, however, a wide array of beginner and intermediate groomers toward the bottom of the mountain suitable for any level of skier. With more improvements on the way and friendly and dedicated team, it’s hard not to feel the magic of Magic.

From the rich history and classic Swiss tradition to the friendly environment and spectacular terrain, Magic Mountain is a destination you should be adding to your winter wishlist. After skiing runs named, “Wand,” “Hocus Pocus,” and “Up Your Sleeve,” you’ll truly understand what it means to “Ski Magic.”