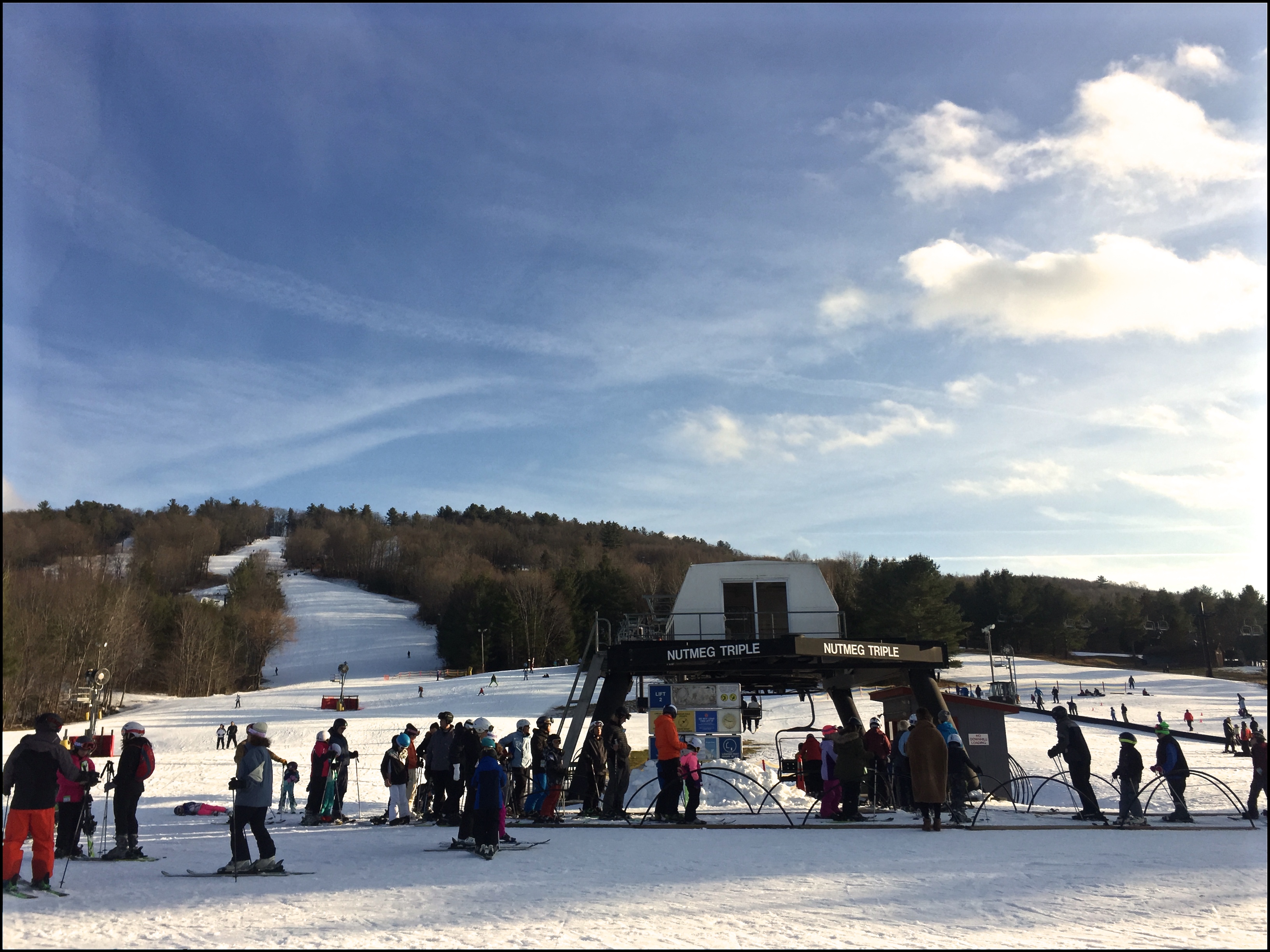 If you’ve skied an East Coast resort in the last 60 years, you owe a lot to Walt Schoenknecht. I know I do. The ski hall-of-famer is the father of Mt. Snow, Brodie, and Mohawk Mountain. He invented snowmaking! But perhaps most triumphantly, he could be considered the creative force behind today’s most popular idea of a ski vacation: one that invites new skiers to fall in love with the sport and captivates our imagination to return winter after winter. “I’ve got an uncanny knack for sensing what skiers want and the imagination and resolute drive to produce it,” Schoenknech told Sports Illustrated after the 1960-61 ski season.

Right around the 2020 New Year, I drove my Oregon-plated Ford Transit through New England’s winding turnpikes to the northwest corner of Connecticut. It’s here at Mohawk Mountain, where Schoenknecht’s magical legacy is quite literally alive and well, in the people and intentional operation of a mountain that inspires skiers of all levels.

I’ve never thought of actually reviewing the snow itself… Aren’t mountain owners at the mercy of mother nature? The powder hound in me is reluctant to give attention to snowmaking. But the fact is, every mountain I grew up skiing relied on Schoenknecht’s technology. Mohawk Mountain’s charismatic Brand and Equipment Manager and self-proclaimed “gearhead,” Jim Shockley, professed that without snowmaking, Mohawk would not survive. At Mohawk, like many of the staff’s operations, snowmaking is more than a to-do. It’s a legacy and a craft.

As the story goes, Schoenknecht and his wife Margaret (Peg) Moss Schoenknecht experienced a damaging season of short snowfall shortly after opening Mohawk Mountain in 1947. Schoenknecht started hunting for solutions. He first hauled in massive ice blocks to chip and cover the slopes that lacked natural precipitation. Then, collaborating with three engineers, the team replicated an air/water compressor used in tobacco farming to make snow, piping air to the trails under high pressure. Early accounts of the experiments describe an “ultrasonic whistle” that beckoned the Cornwall fire department and set off dogs for miles around the mountain.

Steve Hedden is a third-generation snowmaker at Mohawk. After a stint out West as a mechanical engineer for Piston Bully snowcats, Hedden came to Mohawk to work alongside his parents operating the mountain. Hedden took me on a tour around Mohawk’s fleet — roughly 90 snow guns which give 99 percent snowmaking coverage to the mountain and their newest investment in the cleanest Snowcat machine on the market. “Cleaner emissions, more power, quieter… I can start this thing in the shop,” he proclaimed. That wouldn’t be advised with diesel emissions from the majority of snowcats on the market. Hedden and Shockley urged me to ski it for myself.

I journeyed up the Nutmeg lift (the state’s namesake nut) for my first lift-served ride of the year. The day was uncannily warm; and I was worried I’d be sifting through ice crumbles. But even at 2 p.m. after a day of more than 800 skiers covering the 112 skiable acres, the snow held very well. I ventured to guess frequent and attentive snowmaking and grooming cycles help Mohawk’s reputation for great artificial snow.

The mountain was noticeably spacious for its modest 650 vertical feet. Mohawk’s mountain is accessible to skiers of all levels with easier routes down from each of its eight lifts. And despite my visit falling on a holiday weekend, the resort’s many lifts spread the traffic. My longest lift wait was THREE minutes and I was back to skiing in no time. I was honestly surprised at how much fun I had ripping the characteristically narrow, albeit short, black diamond shoots like “Wildwood.” Plentiful lifts, 99% snowmaking coverage, and night skiing meant I indulged often.

I considered what seemed to be a limited number of snowboarders at Mohawk. Shockley confirmed my intuition. Unlike some of the mountains who’ve invested in terrain parks for skiers and riders, Mohawk serves less intermediate/expert snowboarders than other mountains in the east (25-30 percent), focusing their efforts instead on a quality learning experience.

Jim Zaccaria, a Mohawk regular since 1956, credited Mohawk as, “the start of a lot of people’s ski careers […] it was on the forefront of skiing as a family event.” He followed in his father’s footsteps who started skiing at the mountain when it opened in 1947.

Skiing Mohawk Mountain is literally the experience of skiing a state park, a family-owned and operated business, and a landmark in skiing’s history all in one. I felt it as I scanned the Schoenknecht’s family photos in the main lodge, and questioned cheerful staffers who professed gratitude for their jobs. I also watched employees name and greet patrons as community members.

Mohawk Mountain is definitionally authentic: true to its own personality, spirit and character. As Carol Lugar — current owner of Mohawk and daughter of Schoenknecht explained — there was a time when all resorts were independent, each with an “individual personality.” “We’re a little bit of history, little bit of future.” But there’s only one product, “that’s fun.”