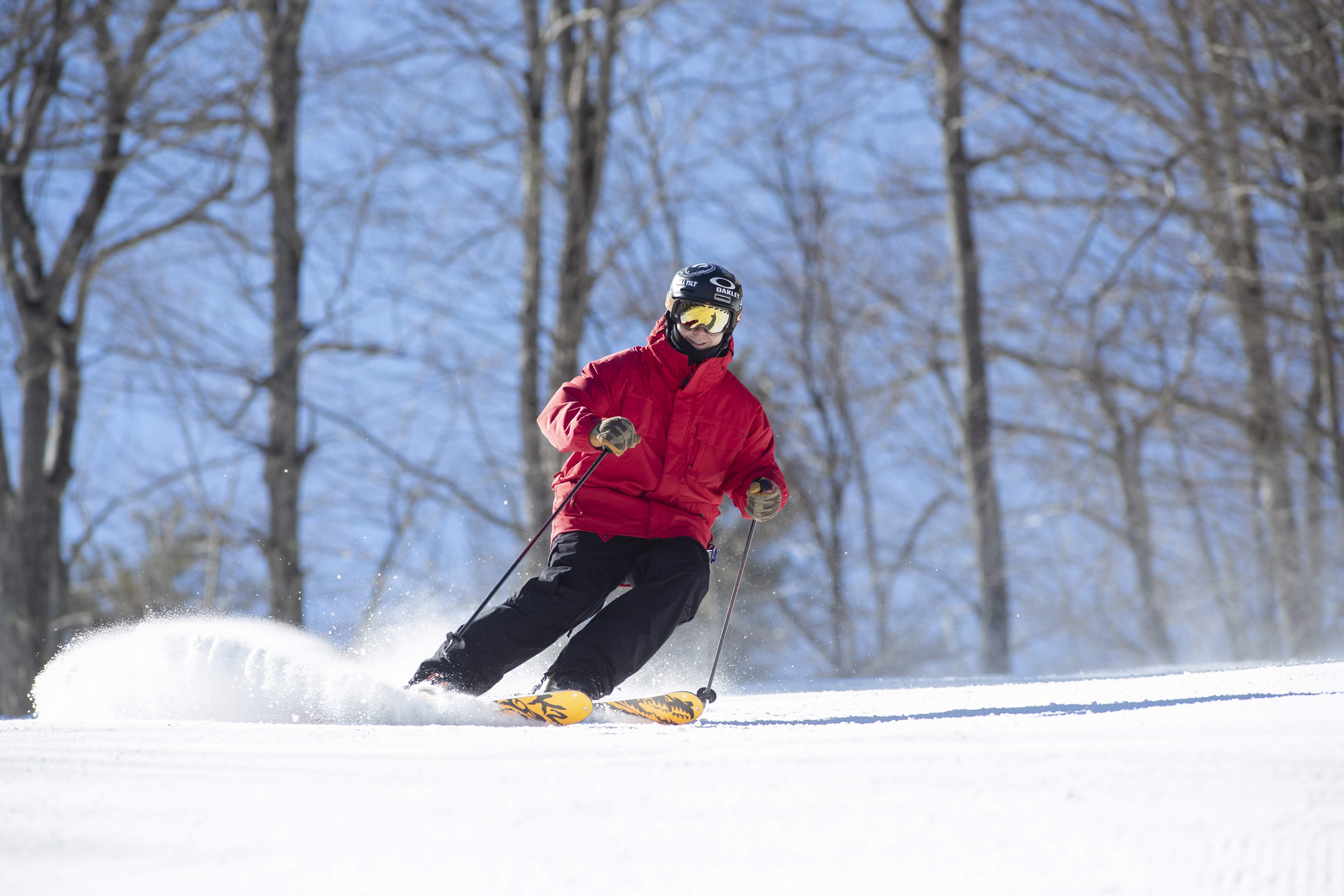 Ahhhh, New Hampshire. Now you’re probably thinking about cuddling up at a quaint bed and breakfast with a pint of Ben and Jerry’s ice cream, a bottle of maple syrup, and a good book. And yes, that sounds lovely… but you, my friend, are thinking of Vermont. We’re talking about New Hampshire! The rebel state of granite hills and the memorable motto, “Live free or die!” The revolutionary state of New Hampshire declared its independence from the Motherland, England, FIRST, a full six months before the Declaration of Independence was signed. Thus coining the appropriate state motto from the infamous General John Stark’s toast, “Live free or die. Death is not the greatest of evils.” Now you’re probably wondering, “Why the history lesson? I’m here to shred,” and to that, we say, “Live free and ski!” New Hampshire has more to offer than a fascinating history and rocks. The Granite State has local ski resorts steeped in brotherhood, tradition and of course, fresh pow. Let’s begin.

The Patenaude brothers four grew up in Henniker, NH. Joe, David, Wayne, and Stuart loved skiing together but hated waiting in lift lines (Who doesn’t?!). The four impatient brothers decided to open their own ski resort because: Why wait in lift lines when you can just build your own? That’s the kind of “can-do” attitude we can really use more of, amiright? In the spring of 1962, on land owned by their father Merle Patenaude, the brothers, along with friends and family, cleared all of the trails themselves. They built a lodge from 30-foot logs cut from the property (picture rugged lumberjacks in faded flannels… now add skis). On Jan. 5, 1963, Pats Peak opened for its inaugural season. Pats Peak quickly became a favorite family ski resort, famous for its friendly environment, long-standing traditions, and of course its legendary M&M cookies, a staple from the beginning.

Just a 90-minute drive north from Boston and a quick trip from Manchester, Pats Peak is one of the premier ski areas in New Hampshire. It consists of 11 chair lifts and 28 trails and slopes within its 72 acres. In 2013 it expanded into adjoining Craney Hill, opening what it calls Cascade Basin, the first enlargement of its boundaries in its history. In other words, more room to shred the gnar! With a terrain park for the experienced riders and a tubing hill for the novice, Pats Peak is an enjoyable destination for everyone. Pats Peak remains a resort where friends and families return every year. Whether it’s the reminder of simpler times on the slopes or the escape from the hustle, Pats Peak is a place to lay down roots and return to year after year. Parents feel comfortable letting their kids roam free while they can enjoy more challenging terrain on their own, or even just sitting in the lodge and enjoying an adult beverage. The family-run ski resort is the longest one in the area to be continuously operated by the same owners, adding some extra “homey” vibes to the already friendly environment. 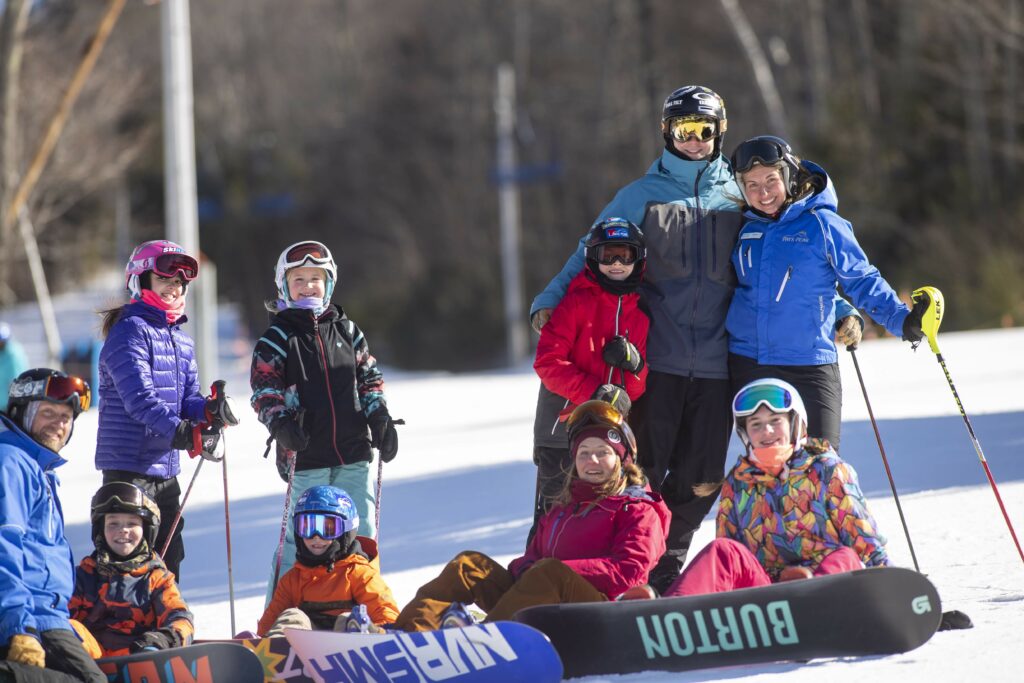 In 1967, Pats Peak opened night skiing to the public, the first in the state. 100 percent of the original ski boundary is illuminated at night, including a run all the way from the summit. A Pats Peak pass gets you almost twice as much time on the slopes compared to many other New England Ski Passes. It’s hard to argue with that logic. On Saturday nights, Pats Peak offers POP (Pay One Price) under the lights. POP includes skiing, snowboarding, snow tubing, rentals, lesson tips, and entertainment all for one low price. In addition to having some of the best night skiing in the state, Pats Peak has New Hampshire’s most powerful snowmaking system per acre. Pats Peak makes snow on 100 percent of its terrain, ensuring that conditions are ideal all season long. That’s right, fresh pow-pow all winter long. If that’s not something to get excited about, I don’t know what is.

When the snow melts, Pats Peak doesn’t lock its doors. The stunning New Hampshire landscape provides the perfect backdrop for weddings, parties, reunions and more. Accommodations like fire pits and a large deck overlooking the mountain make for a picturesque venue for any special occasion. The mountain also opens its once snowy slopes to mountain bikers all summer long, hosting a variety of races including their very own Mountain Bike Festival. Every October, Pats Peak throws its annual Oktoberfest to mark the end of mountain biking season and to ring in the ski and snowboarding season. Their Oktoberfest is complete with German food, drink, festivities, and even its own Oom-Pah-Pah band. When’s the last time you listened to a good Oom-Pah-Pah band? There is also a mountain bike sale and ski swap with some screaming deals to mark the changeover of the sports. So whether you’re a New Hampshire local or just visiting, Pats Peak has something great to offer all year round.

Indy Pass gets you to access to 44 resorts in total, including Pats Peak. Yes, you read that correctly, 44 resorts! This allows Pats Peak to offer skiers and boarders from across the country competitive pricing while maintaining the family-run atmosphere that makes it so special. You don’t have to break the bank this winter to ski a multitude of small, local ski resorts that truly capture the authenticity of the sport. Additionally, the Indy Ski Pass gives you the opportunity to support these independent ski resorts that have been the backbone of ski and snowboard culture since day one. Talk about supporting local. Ultimately you’re supporting 44 different local ski economies at once. That ought to make you feel warm and fuzzy inside! Don’t miss your chance to go back to your roots, and ski some of the resorts that helped shape the sport we love so much.