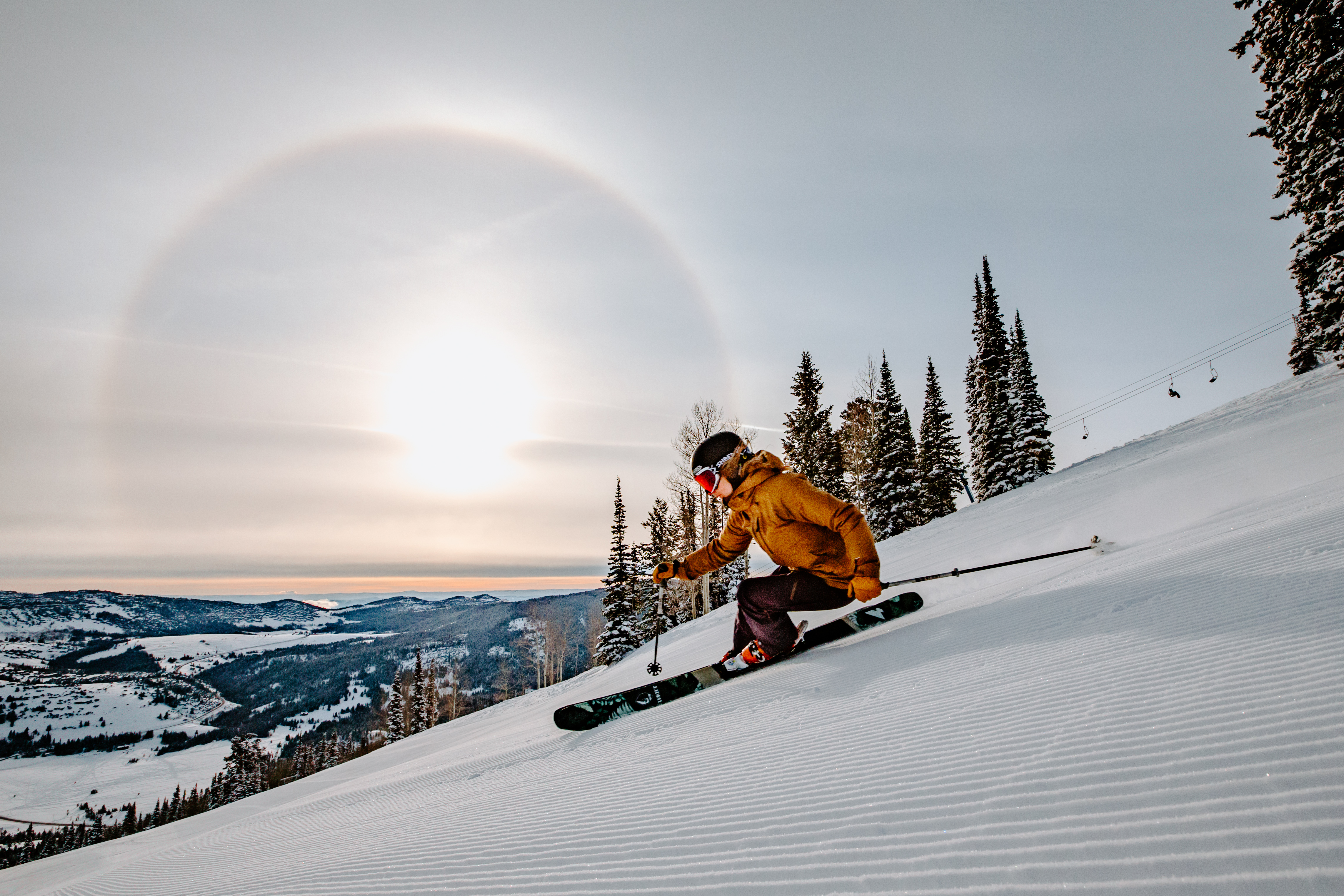 I’ve dreamed of Utah skiing without lift lines. Blue sky, cold-smoke powder, skiing between the aspens. I catch a wide rolling groomer with some pitch, flying to the base where I head into a historic A-frame lodge for lunch. Street tacos.

I’ve dreamed of Beaver Mtn; I didn’t dare dream it would be $50, or free with Indie Pass.

Most of the time Beaver Mountain is a “pretty sleepy place,” according to Travis Seeholzer, X and Y for “the Beav.” Seeholtzer estimates the crowd even on a weekend is 90% locals. But in the week prior to my visit, Beaver was in the midst of a legendary storm cycle and news got out. #POWcopalypse as the mom and pop mountain classified it on instagram dumped upwards of 80 inches, including a notable 3-hr early morning dump that left the crew updating the snow report for +12 inches. Noteworthy icing on an already delicious cake.

Beaver Mtn. is the oldest family-owned ski resort in the United States (opened by Harold “Harry” and Loelle Seeholzer in 1939). Travis is third-generation, continuing the family tradition of skiing hard, and working harder. I met him at the base of “Harry’s Dream,” a lift aptly named after his grandfather who passed away shortly before Travis’ birth. Harold had always had a vision to lift skiers from the base lodge up 1600’ of vertical to Beaver’s summit (elevation 8860′). The project was completed shortly after his death, opening almost 50 fresh acres of skiable terrain. Today, skiers sit three-to-a-seat on chairs transplanted from Alta’s original Germania lift. The ride gives access to substantial ungroomed expert slopes and an impressive 2+ mile beginner’s way down: “Gentle Ben.”

Even on a Saturday afternoon, days after #POWcopalypse, I found plenty of leftovers off Harry’s Dream. Not only does the mountain feel like “Brighton at 9:30AM” even when it’s taken weekend traffic, but it skies bigger than the trail map lets on. There are thinned out patches of aspens and pines across the mountain that protect stashes. From the top of Harry’s, hungry skiers can even access backcountry through a boundary gate at skiers right. Most lines dump back on the access road through Logan Canyon (note: This backcountry area is not patrolled or maintained by Beaver Mountain Ski Area. Note you may encounter avalanche slopes, cliffs, gullies, streambeds and thick forests).

But perhaps the largest contributor to Beaver’s illusive size is Marge’s Triple. The lift, installed in 2003, was the mtn’s most aggressive extension project giving skiers and riders access to several hundred additional acres. The lift is named for Travis’ mother who continues to work at the mountain which she’s operated alongside her late-husband, Ted. I followed Travis down the Sunshine beginner slope, which skis a bit like a cat-track, giving access to tree stashed below in Citizen Kent’s Trees, Lone Pine, and Skid Road. We finished off with a gorgeous wide-groomed trail with a unique fall-line.

Beaver Mtn. doesn’t have snowmaking. That means the team, including Travis, works with the mountain to decide what stays natural and what they craft into a groomed run. The result? A mountain that waits until they’ve got the snow they need (opening Dec. 17 this year), and buttery “amazingly groomed runs.”

The day I skied with Seeholzer he was “incognito”: a new helmet and a “civilian jacket.” It didn’t stop skiers and riders from recognizing him all over the hill. He fielded a range of questions: the long-term vision for the lodge, a local’s request for a wrench to personally open some bathrooms, his own daughter’s plea to ski the backside. His answers were never curt. This mountain was a labor of love.

We spoke to brothers Clair and Darrell Glenn, who were dubbed the “Bump Brothers” by Powder Magazine. The brother’s, now in their 50’s, began their ski career after Seeholzer’s grandmother gave the two day passes in return for odd job work. Today the Glenn brothers ski upwards of 80 days each. Their run of choice, “Harry’s Hollow” is unofficially called, Glenn Canyon. Last year, Clair Glenn skied mismatched skies. The steady entertainment these two provide to the lift riders overhead is just icing on the cake. “When you’re up here, you’re a little closer to Heaven!” Marge Seeholzer famously says. I ordered tacos: pork carnitas.

Stay in the Ogden Valley

My time skiing historic Beaver Mountain started in Ogden, Utah, #1 Ski Town in America according to Powder Magazine. Just 30 minutes from the Salt Lake City airport, and under an hour from Logan, Ogden’s historic downtown is the perfect basecamp for a tour of Utah’s mom and pop ski resorts. I made the reservation after Sydnie Furton, spokeswoman for Visit Ogden, gave her convincing opinion on the area’s unique opportunities. “Learn the story of our past while enjoying the best sushi you’ve ever had.” Yes, please.

Walking into the hotel feels like the rare experience of entering a vision, actualized. It’s situated on a historic Huntsville lot across from the town’s uncovered ice rink. A church and later town school lived here: the spirit of both, alive in intentional design elements like restored church pews used for cafe seating or an antique typewriter.

The Hyde’s “one-of-a-kind farmhouse experience” is laden an impressive collection of ski memorabilia including personal accolades from the family’s time competing as professional skiers and skeleton riders. Assistant Manager, Camdyn Young , colored in the history behind the artifacts: an original Sun Valley single chair from the first lift in America; a skeleton sleigh so heavy I couldn’t lift it off the ground; ballet skis; and a plaque commemorating Dean Perkins, prominent member of the FIS ski team and later Olympic downhill team. Perkins, was Hyde’s uncle and grew up in nearby Ogden.

Furton’s words on Ogden’s unique ability to tie the old echoed in the Hyde’s aesthetic. “History doesn’t limit us from progressiveness,” said Furton. “Ogden being able to preserve our history has been incredible, and served us well.”