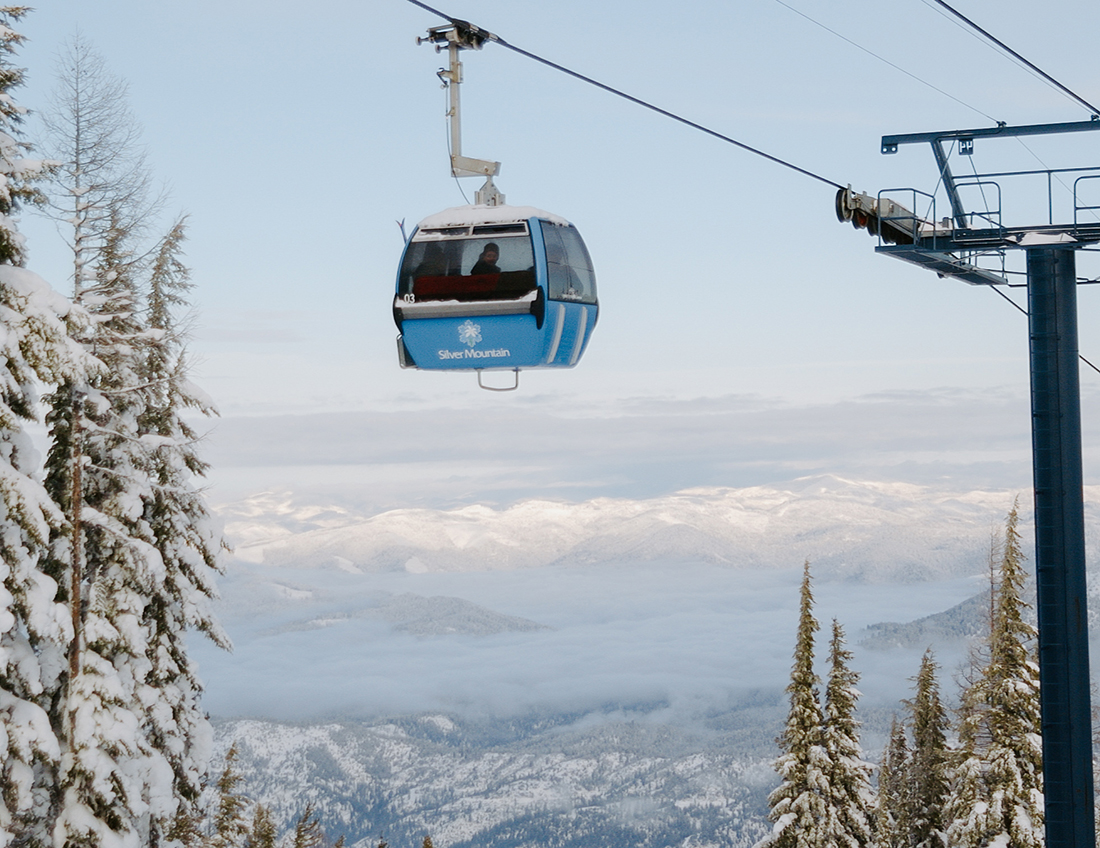 Silver Mountain is home to some of the best skiing in northern Idaho, a region best known for thrilling terrain, deep snow, and sunshine. The ski area sits nestled in the mountains above the town of Kellogg, connected by the long gondola of commuting visitors between the slopes and their lodging.

This gondola is an institution of the region, and to understand its history, and that of Silver Mountain is to learn the story of a community that has worked hard to transition from a 20th to 21st-century economy.

Back when the wild Idaho mountains had a fewer skiers, and a few more prospectors, a gold miner by the name of Noah Kellogg borrowed a burro named Bill and headed into the region known as the Panhandle.

After weeks of searching, he made camp one last time, and Bill, who must have been hungry, broke his rope in the middle of the night and went off in search of something to eat. The next morning, Noah managed to track down the escaped burro, only to find him atop a large outcropping of lead ore — Jackpot!

Bill the Burro had discovered what would become “Idaho’s largest mining operation,” and from then on was known as the legendary “$12-million-dollar-Burro.”

It was this farm animal that a group of entrepreneurs had in mind when they founded the Jackass Ski Bowl in 1967 on that same mountain. The single lift was publicly-owned by valley residents below who bought or traded work for stock in the enterprise. The modest lodge and lift opened up some of the finest skiing in the Northwest, but it fell into bankruptcy in 1973.

Soon enough, the resort was bought at auction by the Bunker Hill Mining Company, who operated the resort until the mid-80s when the regional mining economy collapsed. The Bunker Hill Co. decided to approach the city of Kellogg, just down the hill from the resort, and struck a deal to transition control of the operation to the town.

This is the point in the Silver Mountain story that its present form starts to take shape. The Bunker Hill Mine closed in 1981, and other mines in the region reduced operations at the same time. Thousands were left without work. The Kellogg community’s strategy to mitigate this economic disaster was to reduce their reliance on mining and logging, and convert their town into an outdoor vacation destination. Residents had intentions of developing a robust tourism industry in their backyard. For this plan to work, however, Kellogg needed to have a great ski resort as its pinnacle attraction.

The city of Kellogg set out on an ambitious plan to improve the resort by expanding the skiable terrain, adding lifts and lodges, and even building a Swiss-inspired gondola to transport skiers from the valley floor directly to the resort. The new recreation area opened with the name Silver Mountain in 1990 and offered a completely revamped experience with five lifts, new restaurants, and a greatly expanded selection of runs for visitors to enjoy.

In addition to the resort getting a remodel, the city of Kellogg reimagined itself as a Bavarian mountain town, adding design elements reminiscent of an Alpine village. With new condos, lodging options, and restaurants popping up, the “town’s expansion of its tourism economy was well underway.”

Today, Kellog’s transformation is still in progress, and the “town’s identity” is developing into a hybrid of the original mining community mixed with a healthy tourism industry, and an influx of new residents attracted by the outdoor recreation opportunities that surround the town. At the center of it all is a long gondola line, tying the resort up the mountain and the old mining town in the valley together.

So, given how far this mountain town has come since Kellogg’s four-legged helper escaped for a snack, maybe the title of this heroic story should really be “A Burro Went Looking for Food, but Instead Founded an Entire Ski Resort.” Let’s give credit where credit is due.

The town of Kellogg is in the Silver Valley of Idaho, right at the bottom edge of the northern Panhandle region of the state.

Silver Mountain resort is actually two peaks: Kellogg Peak, to the east, with a summit of 6,297 ft and the original Wardner Peak to the west sits at 6,205 ft. The ski area has a vertical drop of 2,197 ft on its north-facing slopes, and there are 67 named trails on its 1,590 acres.

At the heart of Silver Mountain Resort’s Gondola Village in Kellogg is the Morning Star Lodge. Their condos feature the latest in design and comfort and with multiple floor plans and options to accommodate families and groups of any size and on any budget.

A Day on the Mountain:

Let someone else do the driving (or should we say flying) and hop on the gondola for a luxurious trip up the mountain. Once there, you can take care of any rentals you may require, schedule lessons, or just get started on the slopes!

In addition to its 67 trails, Silver Mountain offers extensive off-piste areas and a snow tube park for the youngsters and the young at heart.

The inbound terrain is rated at 20 percent beginner, 40 percent intermediate, 30 percent advanced, and 10 percent expert. You are sure to find fun for all types of riders and skiers here!

Mogul’s Lounge located at the base of the ski slopes is the choice for an after-ski beverage, and back at the Gondola Resort you can choose from several restaurant options in which to refuel and relax. Alternatively, have a pie delivered from Wildcat Pizza and rest up for the next day’s riding.

Get your Indy Pass today!