In the early years, if you were a skier, there was a little bit of “absurd” in you.

It wasn’t the trendy winter sport you took your family on holiday to Aspen for. There were no glamorous lodges at the base of the mountain to sip hot cocoa at while seeking refuge from the bitter cold or a particularly rough storm. Hot tubs and comfortable, clean rooms with 24-hour service waiting for your return after a long day on the mountain were nonexistent. You were more likely to see a wild animal during your quest to ski a mountain slope than a stranger exploring the same terrain.

“Groomers” was a word used in reference to stable employees watching after animals, not a way to describe a ski slope. “Moguls” were businessmen of great power one read about, not an obstacle of the slopes. To be a skier in the early days, you had to be independent, tough, and love the sport enough to endure the difficult conditions and rudimentary gear.

In the small town of Red Lodge, Montana, there was a group of such individuals who called themselves the Silver Run Ski Club. After years of exploring and scouting the surrounding mountains, the club came upon a location just a few miles down from modern-day Red Lodge Mountain, suitable to their desire of a ski run that didn’t require hiking all day. Two tow ropes and 500 feet of vertical gain allowed these adventure lovers to ski as often as they wanted while snow was on the ground.

As time went on, these pioneers were no longer content with only two rope tows. They set their sights on the Willow Creek drainage and Grizzly Peak for a gutsy expansion project. By 1960, Grizzly Peak opened as Montana’s newest ski area, complete with a single chair lift and three runs. It quickly became the buzz of small ski communities out West. 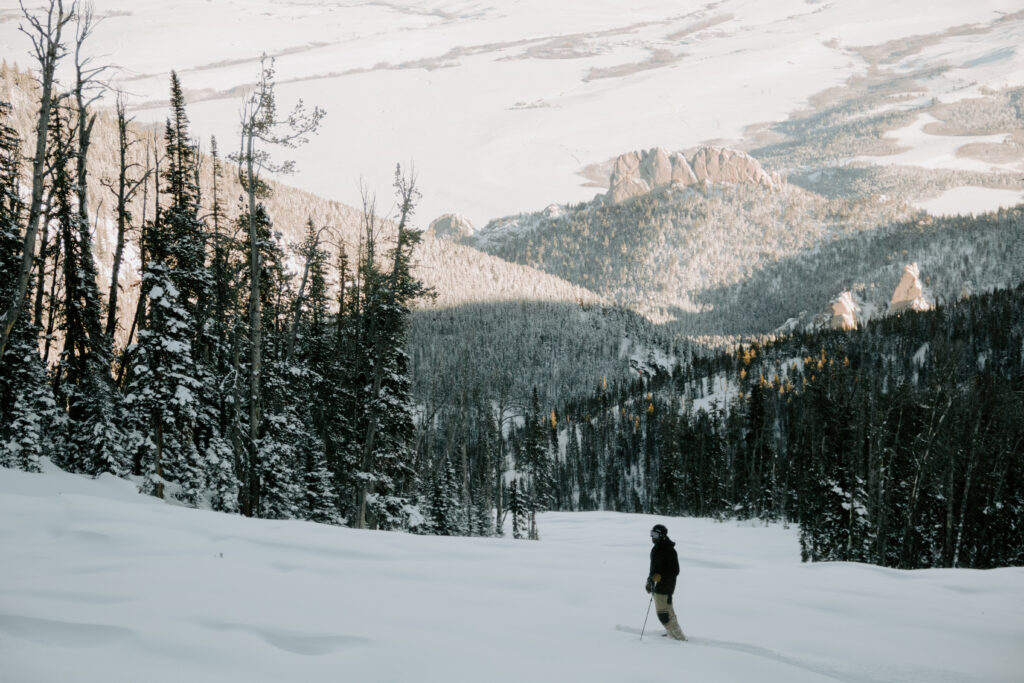 Red Lodge was no longer just a small mining town, it was a ski destination. Skiing was more accessible to the general public, not just the pioneers of the sport; and tourist ski traffic continued to increase through the 60s. By the middle of the decade, Grizzly Peak created Montana’s first fully-certified team of ski instructors. The ski area continued to grow and gain more notoriety, leading the founding members to rename it Red Lodge Mountain, a name that has stayed to this day.

Red Lodge Mountain has continued to grow and modernize over the decades since, installing a new, state of the art snowmaking system in 1996, Montana’s largest at the time. New runs were created, new lifts were installed, and yet throughout the growth and modernization there has been one common thread in the history of Red Lodge Mountain… It has an authentic, free-spirited identity that defined its founders and local residents.

Skiing grew into a mainstream sport adopted by many visitors, from the most serious athlete to the “lodge lounger.” Many mountains became behemoths, attracting massive crowds and raising their daily lift ticket price to absurd rates. Gone were the days of short lines, friendly local faces, and the ability to afford the sport. Elitism and conformity have replaced the intrepid pioneer spirit across most of the industry. Mega resorts and their big business-holding companies have consolidated ski areas and changed the face of skiing into something only the privileged can afford.

Throughout its evolution and growth, Red Lodge Mountain has not fallen into this present-day phenomenon and has maintained the essence of its founding spirit — a laid-back, fun-loving resort where you can enjoy your favorite snow sport. You won’t find the fastest chairs in the country, the tallest peaks, nor the grandest of base lodges, but you will find a mountain with excellent terrain and affordable prices. In evaluating options of where to spend your hard-earned money each season, we must look past the glitz and glamour of the marketing campaigns to what the resort really represents.

This year, to compete in an increasingly difficult industry without having to sell its authentic identity as an independent mountain, Red Lodge Mountain has teamed up with other “small” local ski areas across the West to join the Indy Pass, and offer its proprietors a way to enjoy the sport they love… without having to take out a second mortgage on the house to pay for a season pass/winter holiday.

Indy Pass will allow Red Lodge Mountain to offer competitive rates without losing the authentic core of what created and sustained the ski-area since the Silver Run Ski Club first cleared the area more than four decades ago.

Get your Indy Pass today.