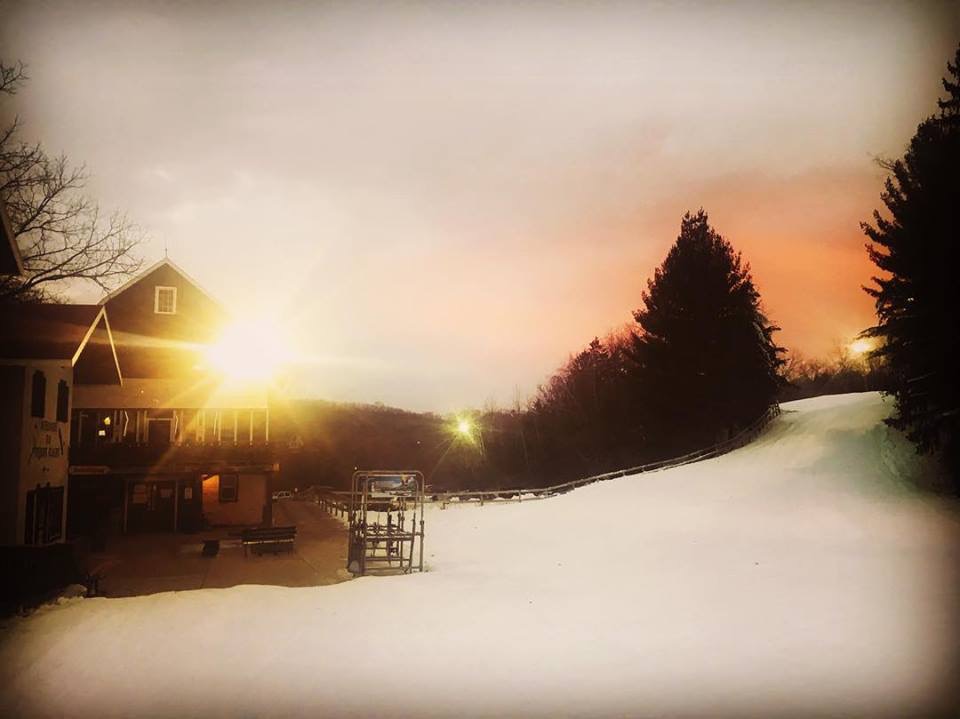 Tyrol Basin might have more to offer you this Halloween season, aside from some mad winter sports action. The ski and snowboard area, located close to Mount Horeb, Wisconsin, has 18 runs offered at beginner (23%), intermediate (33%), advanced (40%), and expert (4%) levels, and five terrain parks, according to OnTheSnow.com.

The five-lift resort is located about 40 minutes outside of Madison, WI, so travelers can opt to stay in town, or maybe splurge a little and stay 7-10 miles near the resort.

Grandstay Hotel & Suites Mount Horeb and Deer Valley Lodge look to be comfortable options for tired feet and hot showers after a long day of trekking in the snow. The Tavern at Tyrol, open Thursday and Friday evenings, has yummy food items to feed the hungry, including BBQ Brisket Nachos.

Ranked four out of five stars on TripAdvisor.com by a few dozen reviews, Tamilyn A., from Black Earth, WI, wrote, “Find old world charm at Tyrol Basin; a great place for learning to ski and snowboard. I also have attended other events at the lodge here. This place is a bustle of activity in winter and holds many memories for me of my childhood as well.”

If Tyrol isn’t your last stop this ski season, check out the Indy Pass, the monster all-access ski ticket at $199 that grants you access to 43 resorts across the U.S. With all the ski equipment imaginable available for rent at Tyrol, a certain level of convenience exists if you just want to hit the slopes ASAP.

Enough about logistics, let’s talk adventures. First up: Terror at Tyrol, running Oct. 25-26 and on Halloween. The event, costing only $17 and available to all ages, starts at 7 p.m. and goes until 10:30 p.m. Multiple “chapters” guide you through creepy storylines, including trapped Vikings, a plagued European settlement, a deadly arranged marriage, and zombies. It might be time to take a break from skiing and let your inner scaredy-cat loose.

“…Before the western expansion of the ‘civilized world.’ The Vikings navigated the globe. Going where they choose. Taking what they would. And bringing with them their pagan ways,” describes the Viking chapter.

The second chapter opens with another gory tale: “…And the bounty of the land was more than adequate for their simple needs. Until The Evil (quieted) for so long, became once again hungry for life. For so long the flock fed and fattened into complacence, now ready for the slaughter…”

And the story of Josephine Carter-Rowan: “Some are destroyed by evil. Devoured and swallowed whole before they know what hit them. Some are corrupted. With their will subverted and with twisted intent. They surrender their soul. But sometimes there are those who actively seek it out. A black heart in active consort with the darkness. Such is the story of Josephine Carter-Rowan. The product of an arranged marriage between a girl of 17 in the care of the state and a …man whom… to call him a fiend would be generous.”

The last chapter invites you to explore a zombie wasteland: “The onslaught awaits the next offering to haplessly (wander) though the gate. Who knows what mayhem may come. Or what necromantic beast may dwell beyond that gate. All we can know for sure is that whatever may come, evil always survives. Feeding on ignorance, and fear. An appetite growing stronger and more ravenous with every meal. A disease without a cure.”

Returning to a more tame theme, Tyrol will also offer an Open House and Equipment Resale event Oct. 27, starting at 8:30 a.m. The event will include an option to take your season pass photo, a job fair, free scenic chairlift rides, and an open bar and grill. If you have equipment to sell, visit the link listed above for more information before the event.

Three “minority owners” and 33-year-old ski enthusiast Nathan McGree purchased Tyrol in 2018, spending millions of dollars to own the 126-acre property, according to the Wisconsin State Journal. McGree was the resort’s general manager before the purchase.

“…McGree’s ideas include adding a tow rope for the beginner’s hill but also more long-term plans like the addition of mountain bike trails, a haunted house in the fall and making improvements to the chalet for a year-round restaurant that could be open on weekends and better serve weddings and private parties,” according to the 2018 article. “McGree also has thoughts of a giant slip-and-slide and music events.”

McGree has his own experience in haunted houses, helping build “Screamin Acres” close to Stoughton, WI. He was led to Tyrol in search of a space to make his own spooky attraction.

“…After months of negotiations, working through a maze of financial requirements and almost walking away from the deal, McGree found himself the owner of a ski hill,” according to the article.

Most of the hill’s ownership is staying within the family.

“McGree holds a 70 percent stake while the remaining 30 percent is held by Brian and Jan Patrick of Sun Prairie, and Mark Anderson, a Fitchburg doctor. The Patricks are the parents of McGree’s fiance, Autumn,” per the article.

Whether you want to be spooked or ski your heart out, hit Tyrol before the real scare happens… the ski season ending.